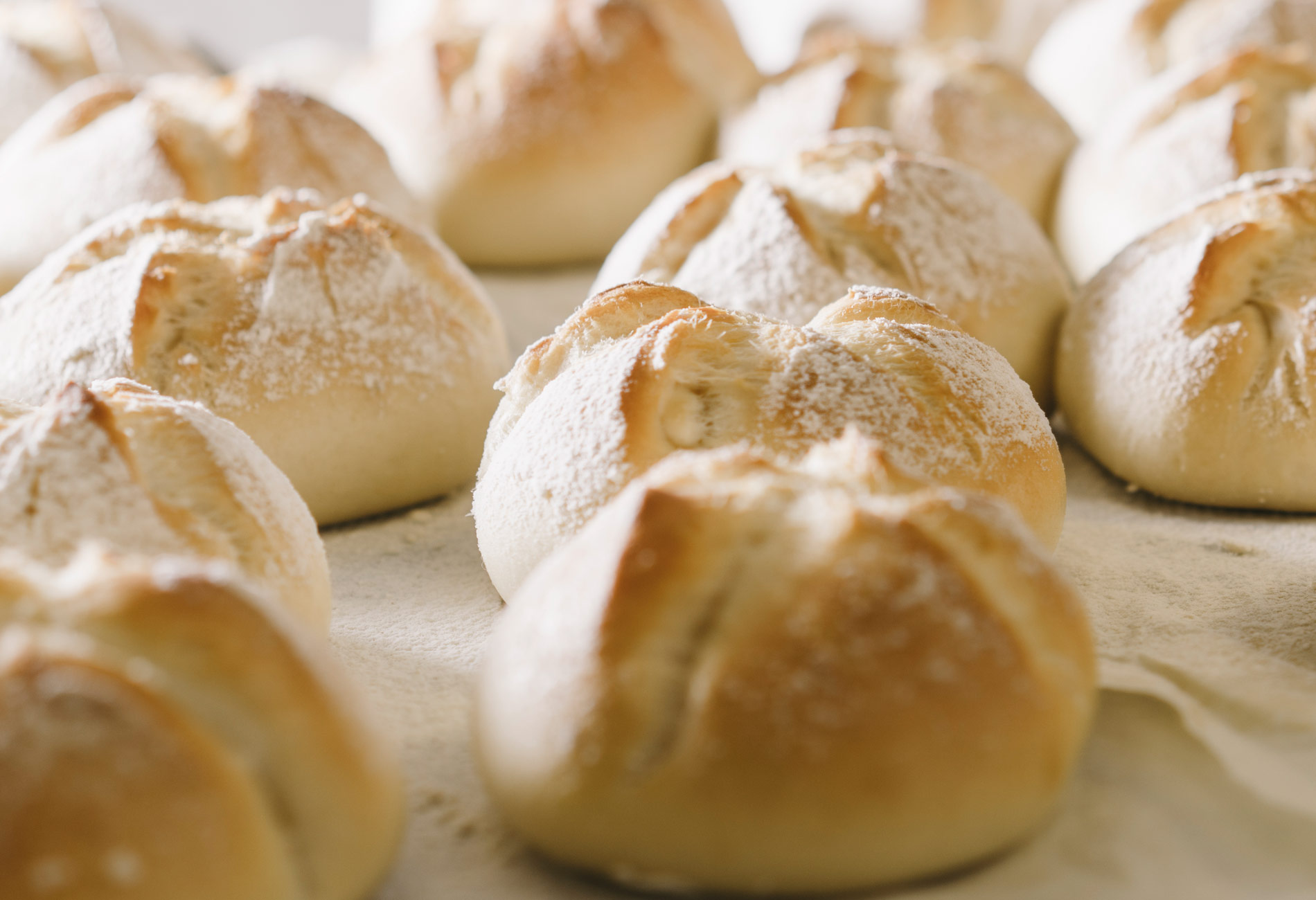 Bread, the staff of life, has been reborn, with bread-making courses, tastings, and new bakeries offering time-honoured varieties made with sourdough and the stone-ground flour of all but extinct cereals. Bread has even won itself a place in haute cuisine and the best restaurants pair their dishes with just the right types.

Indeed, bread has made a round-trip journey. Modern life filled people’s homes with industrial sandwich bread and frozen loaves. The journalist and bread expert Ibán Yarza says “bread served warm at home at any time of the day seems to be a great idea. It appears to be fresh-baked but its warmth conceals its tastelessness”. Yarza holds courses all over Spain and has published his own manual, Homemade Bread (Larousse, 2013). He has also created food-lover forums and is one of the people behind the growth in the number of our country’s ‘bread fanatics’. “My courses are always a big success because people are really eager to do things with their hands in today’s technological world”.

Ibán Yarza’s passion for bread led him on a journey across Spain to document the breadmaking process in village bakeries, which are tending to disappear because of a lack of successors. This Herculean task cost him many a sleepless night, observing the people at work in bakeries throughout the country. He has presented this experience in his book Village Bread (Grijalbo, 2017), which is full of stories about Spain’s bakers and their overwhelming diversity of breads: rosca, hogaza, mollete, bollo, bica, pan de moños, lechuguino, talo… Yarza says sadly: “the rural world is vanishing and so is village bread. A bakery in Toledo closed down four days before I got there and they saved the last loaf for me so I could take a picture of it”.

Fortunately, “gastronomy is in fashion and now there’s a rebirth of bread underway here, a process that began some years ago in countries like England and the United States”. Young highly-trained bakers have recovered natural processes and use technology to make bread like it was in the past or even better. Sometimes they belong to the fourth or fifth generation of families devoted to this craft, while others who were simply fond of making bread at home decided to turn their passion into a profession, opening bakery shops in Madrid or Barcelona to share their crafted loaves. And they’ve been quite successful.

A few names stand out in particular in this revolution, like those of Xavier Barriga (Turris), Anna Bellsolà (Baluard) or Jordi Morena (L’Espiga d’Or) in Barcelona; Tomeu Arbona (El Fornet de la Soca) in Mallorca, and Beatriz Echevarría (El Horno de Babette) or Javier Marca (Panic) in Madrid, and in many cases they supply bread to Michelin-starred restaurants. In addition to being excellent bakers, they are good communicators in the social networks and they publish manuals and hold courses to reveal the secrets of sourdough, fermentation and flours. “Until not long ago, —Ibán explains—, most courses were held by manufacturers of bread improving agents: additives that boost the speed with which dough rises or its workability to produce good-looking bread. But now bakers are being trained better than ever and today’s top breads are the best that have ever existed”. To judge bread, Yarza says you should buy it as if you were blindfolded in order not to be misled by its appearance and then “taste it without toasting it or spreading butter or tomato on it. Bread should have the taste and aroma of... bread! It’s as easy as that. So don’t look... just taste and smell!”.

Bakers 2.0
Wheat, rye, corn, oat, buckwheat, spelt, bread-wheat… White flour has been over-rated for decades but the new bakers are bringing back flours that are very little refined, ecologically produced and stone-ground. Jordi Morera, who belongs to the fifth generation of bakers at L’Espiga d’Or (Vilanova i la Geltrú, Barcelona Prov.), joined the bakery after obtaining his university degree and went on to recover his family’s wood oven, built during the Spanish Civil War. He has recently published The Bread Revolution (Montagut Editores, 2017), a compendium of bread-making philosophy and technique. His goal is “to make bread that’s great to eat and great for your health”, basing his products on natural sourdough, long slow fermentations at mild temperatures, and a crafted process respecting the pillars of ‘slow food’: proximity, sustainability and ecology.

In addition to promoting the bread-lovers’ forum culturadelpa.com and holding classes for professionals, Morera shares bakers’ everyday concerns on the social networks. “We bakers are small fry and don’t have much pull so all we can do is tell our story”. “Actually, more than ‘revolution’, I look at things in terms of evolution”, says Morera. Now we’ve got science, we know why things happen and we have technology to help us. He advocates a “wild breadmaking scenario” in which “bakers will finally forget all about chemistry and use natural processes and stone-ground flours to make bread that really meets the expectations of today’s consumers”.

Jordi gives us the keys to recognizing good bread: “You should ask the baker where and how his bread is made”. He agrees that it’s not a good idea to judge a bread by its appearance: “It should have weight, it should make a statement, and its crumb should be moist and a bit rubbery. The crust should be crisp, even though crafted breads often have thick ones. There should be something tart to its flavour and it should have character resulting from a long fermentation. And it should keep – quality bread should stay good for three or four days”. He sees bread as a sensory thing, a healthy food with added value. “If you work with wheat from the other side of the world, you’re leaving an enormous carbon footprint. But if you use stone-ground grain from your own area, you’re making a sustainable product that helps to create jobs for people and to restore the local environment”.

The best bread in Barcelona
Turris is the bakery of Xavier Barriga. It is a place imbued with his philosophy and way of looking at bread, which he makes with raw materials of the highest quality. Xavier has five shops in Barcelona and his four-tipped loaf has become famous. Anna Bellsolà, a member of a fourth generation of bakers, is the woman behind the queues that form at Baluard to carry off such loaves as her baguette made of wheat flour with three-phase fermentation and individually baked in a wood oven. Xevi Ramon is the creator of Triticum, where bread is made for haute gastronomie; his extensive variety of breads and of good things to pair with them may be found at the Fábrica Moritz Barcelona. The gourmet restaurant Panes Creativos, of Daniel Jordà, works with the best products to make things like his market bread and his seasonal loaves, which are refreshing in the summer and substantial in the winter.

El pan de payés
The most highly esteemed bread in Catalonia is the type called pa de pagès or country bread. It has an airy crumb and it is cut into slices, rubbed with tomato, sprinkled with virgin olive oil and eaten with local cheeses or charcuterie. Up until the last half of the 19th century, the bread that was made in the homes and bakeries throughout the country was round, dense and dark, using whole wheat and rye, and it didn’t go by any name in particular. At the end of that century, however, when Barcelona’s industrialization drew thousands of people from the inland towns of Catalonia and the rest of Spain, the bakeries continued to make that traditional bread and it started to be called ‘country bread’. Today the Protected Geographical Designation Pa de Pagès Català ensures that bread is crafted with sourdough and top-quality flours.

The true essence of wine

Barcelona
A visit to a winery lets you discover all the details and secrets of winemaking. A number of prestigious wineries in the surroundings of Madrid…

Barcelona
Originally from the Americas’ tropics, this ‘food of the gods’ reached Europe in the 16th century. And it came to stay. Now young chocolatiers are…

Martín Berasategui. The greatest of the great on Spain’s culinary scene

Barcelona
Energy, optimism and tenacity: with these qualities this celebrated chef has gone on to become the holder of no less than 12 Michelin stars. Even so…