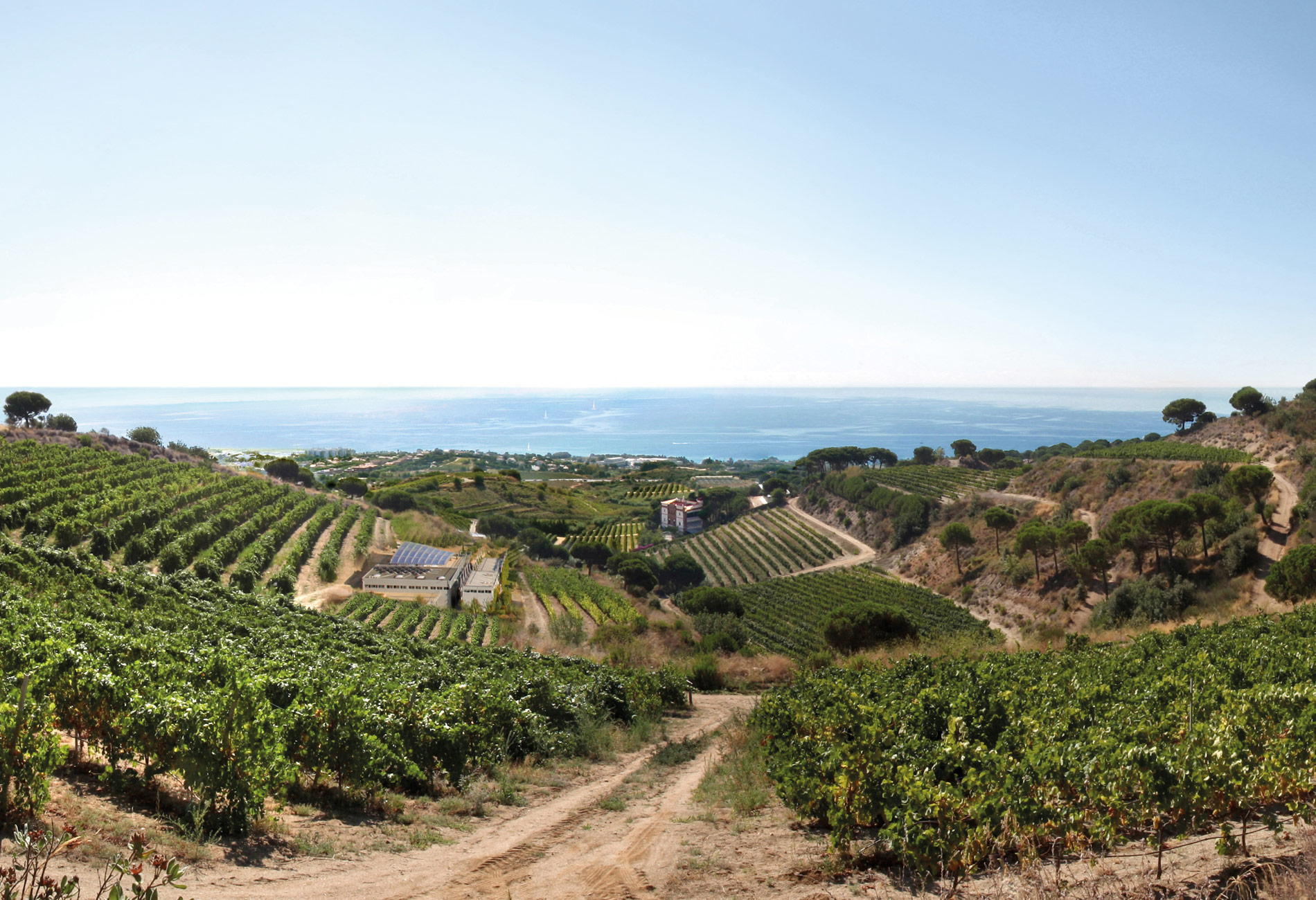 A visit to a winery lets you discover all the details and secrets of winemaking. A number of prestigious wineries in the surroundings of Madrid and Barcelona welcome visitors to their facilities.

For many people who enjoy travel because it gives them the chance to discover the true essence of the places they visit, wine is an aspect of culture that gives them  a reason to get close to nature, to see beautiful vineyards and to learn more about the winemaking process, its history and the people behind it.

The growing popularity of wine tourism stems precisely from incentives such as these and fortunately enough, in Spain many notable wineries lie much closer to the big cities than might be imagined. This is the case of Barcelona and Madrid, for example, which have traditionally been supplied with good wines from their neighbouring areas, just as they are today. Indeed, several outstanding wineries, including a few that are highly acclaimed by connoisseurs, are to be visited in the countryside surrounding these cities, at a distance of less than one hour’s drive.

Alta Alella, vineyards with a view near BCN
In 2001, Josep Maria Pujol-Busquets, a prestigious oenologist with a deep commitment to ecological principles, fulfilled a dream he’d been pursuing for over two decades together with his wife, Cristina Guillén Soldevilla, and their children.

The story of Alta Alella began when the couple purchased Can Genis, a Modernista farmhouse on a property in the Marina Mountains Natural Park between the municipalities of Tiana and Alella, just a little over 20 minutes from the centre of Barcelona.

After restoring the beautiful farmhouse’s original charm, the family breathed new life into the old vines of the property and built a modern ecological winery for the production of authentic still wines and cava sparkling wines that are respectful of the local grape varieties and terroir.

The first varieties selected by the oenologist for this project were Pansa Blanca and Mataró —local names in Alella for Xarel·lo and Monastrell, respectively. Today, however, on the property’s 17 hectares of vineyards and on the other 50  controlled by Alta Alella in the D.O. (Designation of Origin) Alella —Catalonia’s smallest D.O.— these grapes share the land with several other varieties: Chardonnay, Syrah, Viognier, Cabernet Sauvignon...

The vines on this property grow on terraces and hillsides just two kilometres from the Mediterranean Sea, and they are cultivated by certified ecological viticulture methods. The family has recently gone even further in their commitment to ecology, opening a new winery, Celler de les Aus, adjacent to the Alta Alella facilities. Celler de les Aus produces “natural” still wines and cavas without using sulphur dioxide in either the vineyard or the winemaking and bottling processes.

In addition to carefully maintaining the high standard of quality of all the wines in its wide range of products, Alta Alella has also become firmly established as a magnificent place for wine tourism thanks to its location close to the city of Barcelona and its extensive programme of activities for visitors, which changes every month.

Can Ràfols dels Caus, a 2,000 year-old property in El Garraf
Near the seacoast town of Sitges stands El Garraf massif, a calcareous area bounded by the Prelitoral range, the Ordal mountains, the plains of El Penedès, El Litoral and El Garraf, and the Mediterranean Sea.

Here, just a short distance from Sitges, in the heart of El Garraf massif —a place of austere beauty where one still finds marine fossils showing that this whole area was covered by the sea some 20 million years ago— lies the acclaimed winery Can Ràfols dels Caus.

This property’s history reaches back some two thousand years. As it is today, the fortified farmhouse, historically the centre of agricultural activity here, dates to the 15th century, but some of the building’s architectural features bear witness to the estate’s ancient Roman origin.

Can Ràfols has belonged to the Esteva family since 1939, when it was purchased by Jacinto Esteva, the grandfather of Carlos, the present owner. Carlos took charge of the property in 1979, restoring it and launching the project of today’s winery, which involved the recovery of vineyards, the introduction of new grape varieties, and an innovative outlook on the production of quality wines.

Carlos Esteva’s enterprising character and his zeal for experimenting with a broad range of grape varieties, led him to introduce into El Garraf some grapes that had never previously been grown in Spain, such as Chenin and Incrocio Manzoni whites.

On the winery’s 90 hectares of vineyards, these grapes are accompanied by others of local origin, such as Xarel·lo and Macabeo whites and Sumoll red, together with a long list of varieties from abroad: Sauvignon blanc, Merlot, Pinot noir...

In addition to this wide range of grapes and the property’s long farming tradition, what stands out most at Can Ràfols is its new wine cellar, excavated in the dolomite bedrock of El Garraf. With its exceptionally modern design and great complexity, this project took over a decade to be completed, in 2016.

El Regajal, wines amidst butterflies
In the town of Aranjuez, on the southern boundary of the Region of Madrid, El Regajal is doubtless one of the world’s few winegrowing properties to stand in an area recognized since the 19th century as the habitat of an extraordinary diversity of butterflies, with no less than 77 species of the total of 225 listed in the Iberian Peninsula.

Located just 50 kilometres from Madrid and less than four from the Royal Palace of Aranjuez and its celebrated gardens, the winery Viñas de El Regajal has 400 hectares of land, 14 of which are planted with Tempranillo, Cabernet Sauvignon, Syrah, Merlot and Petit Verdot grapes.

For its oenological project, El Regajal had the guidance of the well-known consultant Ignacio de Miguel from its beginnings, adding the French expert Jerôme Bougnaud to its team in 2002. Bougnaud introduced biodynamic principles into the winegrowing process to respect the earth’s natural cycles and to express the terroir’s authentic character in the wines.

El Regajal’s facilities are available for the holding of events and it organizes visits for people interested in its winery and its vineyards.

Valquejigoso, a restaurateur’s dream
The owner of three well-known and highly acclaimed restaurants in the Habsburg Madrid (Las Cuevas de Luis Candelas, La Posada de la Villa and La Taberna del Capitán Alatriste), Félix Colomo is an ambitious businessman who is bent on showcasing the quality of the Madrid Region’s wines. To achieve this he has become directly involved in winemaking, launching his own project in 1994 in Villamanta, a town in the region’s southwestern area.

Likewise, on Dehesa Valquejigoso’s 970 hectares, vines of these varieties grow amidst common, holm and cork oaks in a natural setting inhabited by fallow and red deer, wild boar, rabbits and other native fauna. The property features a modern winery with the latest technology, allowing the oenologist Aurelio García to ensure the production of splendid wines with a marked personality.

Valquejigoso may only be visited by prior appointment but it is unquestionably a place of the greatest interest for wine-lovers who wish to discover the true essence of Spanish wine, just 45 kilometres from Madrid.

Premium locality cavas and experimental grapes
Within the broad scope of Catalan winemaking —which unfolds in ten D.O.s or Designations of Origin (the largest number in peninsular Spain), Alta Alella and Can Ràfols dels Caus are two very different wineries, both featuring an extensive catalogue of wines. Alta Alella stands out for its cava sparkling wines (one of them, Mirgin Exeo, is of the highest existing category: Qualified Premium Locality Cava), and for the wines it produces with Alella’s local grape varieties: Pansa Blanca, Pansa Rosa and Mataró. In its “natural” wines bearing the label of Celler de les Aus, Pujol-Busquets’ winery also experiments with interspecific, hybrid and vine disease-resistant grapes.  Can Ràfols dels Caus works with a broad varietal spectrum as well, producing one of Spain’s best rosés (Gran Caus Rosat), notable white wines (La Calma, El Rocallís, Pairal) and excellent reds.

Barcelona
Originally from the Americas’ tropics, this ‘food of the gods’ reached Europe in the 16th century. And it came to stay. Now young chocolatiers are…

The rebirth of bread

Martín Berasategui. The greatest of the great on Spain’s culinary scene

Barcelona
Energy, optimism and tenacity: with these qualities this celebrated chef has gone on to become the holder of no less than 12 Michelin stars. Even so…